About the Japanese Spitz 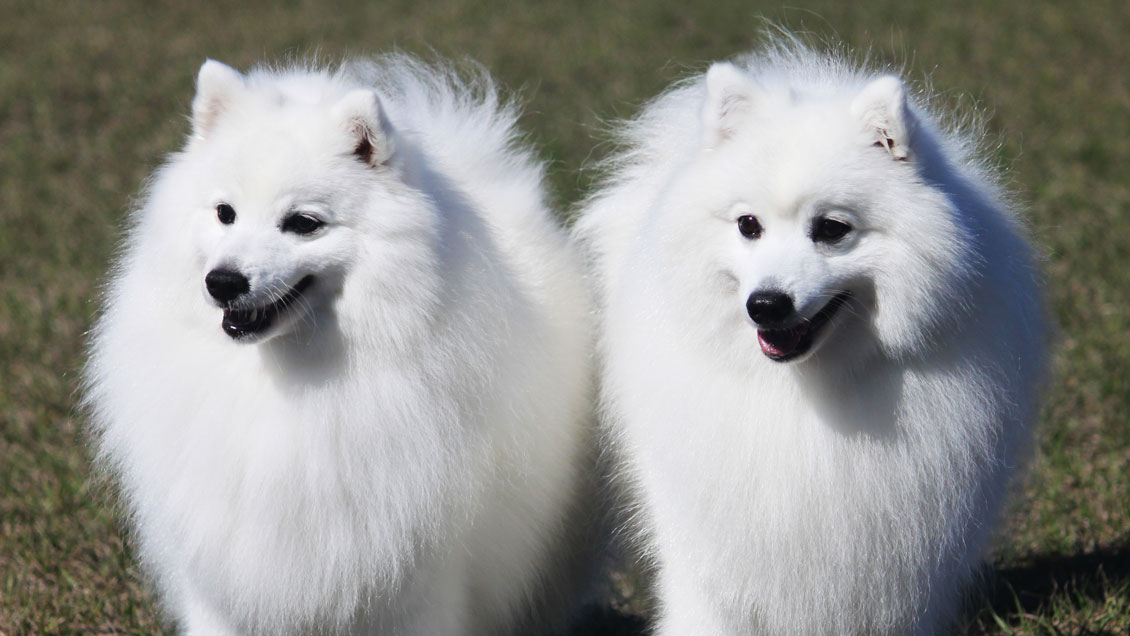 The Japanese Spitz has been recognized as a breed for more than 40 years.  It did not reach the West until the beginning of the 70s.  The first European areas to accept the breed was Scandinavian countries and Great Britian. Until 1985 it remained unknown and ignored by most nations, such as France, Germany, Italy and Austria. Later the Japanese Spitz spread rapidly despite the relatively few specimens,  gained more and more followers as soon as its excellent qualities were discovered and appreciated.

The Japanese Spitz has been a real discovery because of its handsome appearance like that of a small-sized snow white arctic dog.  The Japanese Spitz is complemented by some very particular temperamental characteristics.  It is often improperly called “mini – Samoyed”.  In fact, this dog is endowed with a marked sense of property and territory, as well as a strong personality lacking in submissiveness.  It is naturally inclined to assume the role of a true protagonist in the family right from puppy hood. Behavior towards man reflects a sense of mutual friendship rather than instinctive submission. This has created new situations of co-habitation even for long-experienced fanciers. It is a common occurrence that people who have had a Japanese Spitz as a pet are no longer able to find satisfaction with any other breed.

Origin of the Japanese Spitz

The first information we have about the development of the breed dates back to not more than 80 years ago and it has now been proved that this dog was created and developed in Japan by expert cynologists between 1920 and 1950; their starting point was a number of spitz dogs imported at different times from different countries.

As with many other breeds, we do not know the precise recipe for the cocktail from which the Japanese Spitz was born, so various theories have been put forward. Moreover, there is a veiled dispute between those who regard this dog simply as a descendant of the German Spitz and those who consider its origins as more distinctive and singular.

From the information we have collected and the arguments we have put forward it can be stated that:

1. The Japanese Spitz was originally created from at least 2 varieties of dogs; the American Eskimo and a white Russian Spitz (Laika) imported to Japan via Manchuria.

2. Direct utilization of the German Spitz to develop the original Japanese Spitz is still under debate, even if it is likely; at any rate this breed had an important part in the development of the Japanese Spitz indirectly through the American Eskimo.

3. It seems that the direct descendant of the Japanese Spitz from the Samoyed must be excluded, although the two breeds show remarkable similarities and some Samoyed blood may have come to the Japanese Spitz through the white Russian Spitz (Laikas) imported from Manchuria.

4. After the Second World War the Japanese Spitz suffered from some uncontrolled cross-breeding with other similar dogs (German Spitz, American Eskimo, Samoyed, unidentified white Japanese dog), but the efforts of the breed fanciers managed to save this dog from significant debasement in time.

Characteristics of the Breed

The Japanese Spitz is a classic medium-sized spitz covered with a thick, snow white stand-off coat, which consists of a long straight outer coat held by a profuse and soft under coat. It’s head has a sharply pointed muzzle and triangular shaped ears standing erect. The tail is of medium length, has a rich fringe of long hair and curled over the back. The overall quality of the body should be firm and strong, full of flexibility. Fore and hindquarters should be well proportioned and balanced. The general appearance should be noble, first of all, and united in a perfect sate, indicated structural beauty in a harmonious whole. The ideal ration of height at shoulders vs length of body is 10:11.

Its not hard to see why one would love the Japanese Spitz. It’s an alert, lively, bold, eager to please, intelligent family dog. They are companion dogs and make wonderful versatile pets. With a tendency to be wary of strangers upon first meeting, so time and patience is required for this bread to become familiar with your guests and friends, but after that you have a friend for life. They are great watch dogs as they keep constant and careful watch over their territory.

Despite its impressive coat, the Japanese Spitz is surprisingly easy to maintain. A brush once a week except for when they shed their coat which is twice a year then daily brushing is required to remove the dead hair. This usually lasts up to a week. They don’t have a doggy smell even when wet and as their coat has a silk component mud and dirt does not stick to it so if you are worried about your pristine white dog getting muddy, rest assured this will brush out easily, leaving your dog white again.

Average Lifespan
When considering a dog please realise you are taking it on for its lifetime. Japanese Spitz lives to around 12-14yrs or age.

Average Size,Weight, and Height at shoulder: 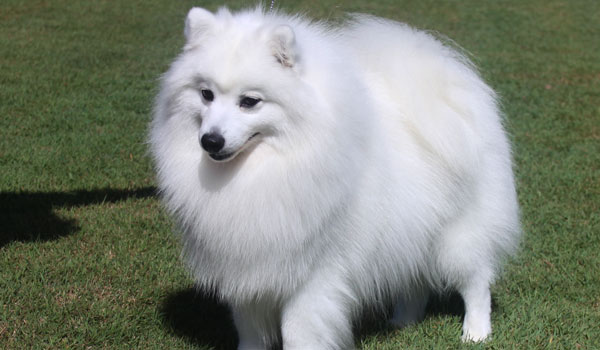 The Japanese Spitz is a family dog. They thrive on human companionship. When you are home they want to be with you. So they are an indoor and outdoor dog. Not a breed you can just leave in the backyard as they want to be apart of the family. They are an intelligent breed always eager to please, each dog developing its own personality. In temperament, they are alert, intelligent, bold and lively. They tend to be wary of complete strangers that rush up to them without formal introduction. They prefer a gentle approach, after which you have a friend for life.

The are characterized by their great courage, affection and they are devoted companions. They are small enough to enjoy being a lap dog, but let it be aid, at their discretion, for despite these qualities are nevertheless of an independent nature with a will of their own. 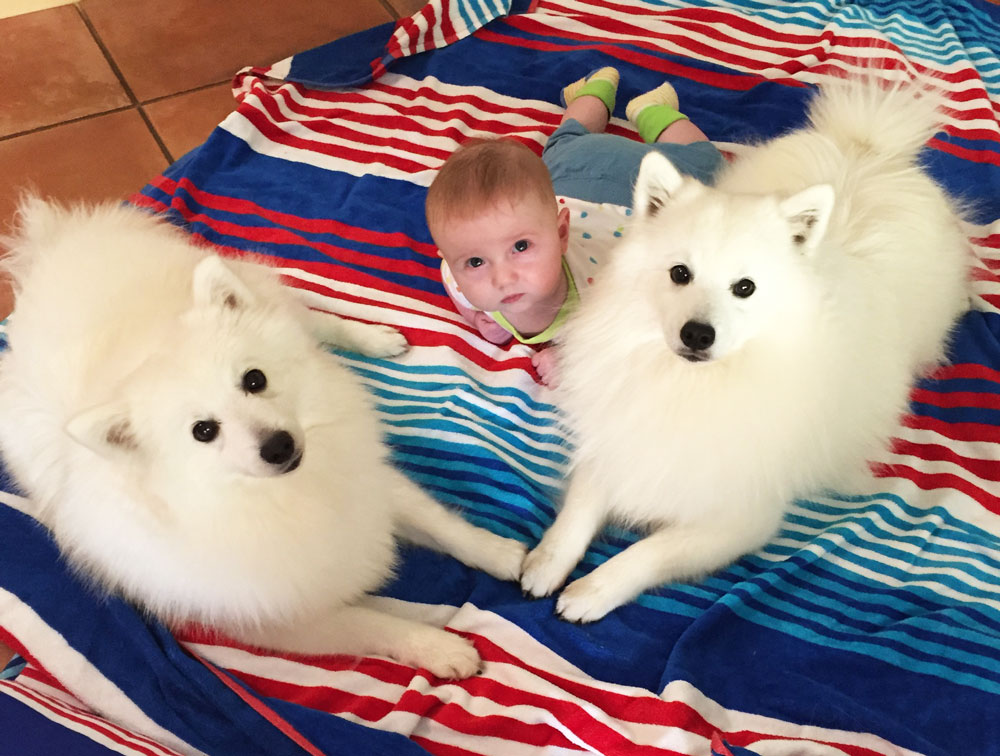 Compatibility With Other Pets

As a companion dog the Japanese Spitz should be familiarised with other household pets at an early age; it will then live happily and reliably with them. They can have a dominant nature and when introduced to a household with other breeds they may very quickly become “The Boss” even over much larger breeds.

Despite its long pure white coat the Japanese Spitz is a low maintenance breed.  Contrary to most people’s expectations and beliefs their coat is very easy to look after. Because, due to its texture/silky component, mud and dirt fall off or can be brushed out very easily. While they love to play in the dirt, this is a fastidious/clean dog that does not like getting dirty and, like a cat, will lick itself clean. Provided they are kept well groomed (about once a week) they should only require a bath about once a month. They shed their coat twice a year. The shedding will usually only last one week and the dead hair is easily brushed out. In between shedding times you will not get any hair loss so about two weeks in the year you will need to brush them daily to help remove the dead hair or alternatively take them to a professional groomer twice during their shedding and ask them to remove the dead hair for you. Some people save the hair and have it spun to knit with.  For all you need to know visit our care section.

They do not need lots of exercise, but they are an active breed and enjoy being taken for a walk. If they are bored they can be mischievous. They are not a dog you can leave in the backyard and forget. They enjoy living both indoors and outdoors, in fact they enjoy being wherever you are, they thrive on human companionship but are happy to be the only dog in the backyard (ie they don’t need another companion dog). 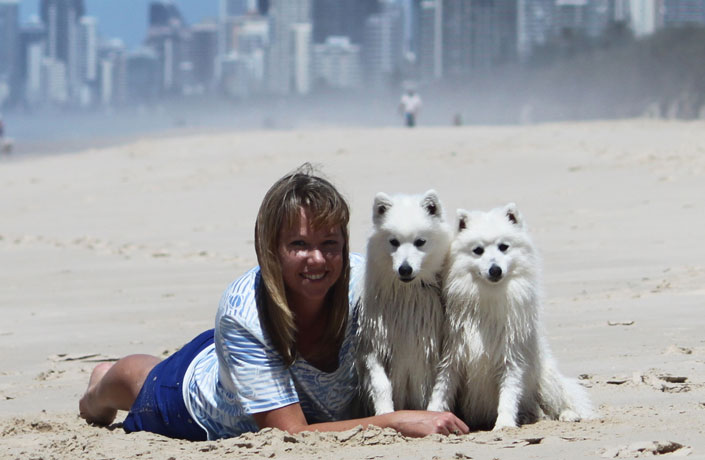 The Japanese Spitz is a family dog seeming to thrive on the different attention and affections from each family member. Although they will choose one family member as their leader and bond more closely with that person. A young puppy (3-12months) could be a “handful” for children under the age of 5 without adult supervision. Having said that, they also make an excellent and loving companion for a single person.

Now you know a little about the Japanese Spitz and have decided this is the dog for you or you want more information, please contact me to gain a better perspective of the breed and its needs or for information about available puppies.

I often get asked which sex is better Male or Female? My answer to that is that puppies are like children, you don’t know what you are going to get personality wise. It is the same with puppies. Each puppy develops it’s own individual personality as it grows and this becomes more obvious when they leave their litter mates. It is a personal choice when it comes to either getting a female or a male puppy.