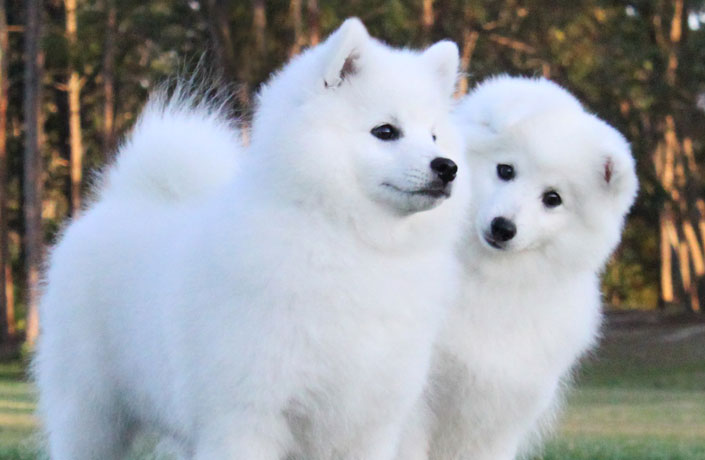 Shanspitz will be celebrating a year of puppies! Litters Due November 2022, February 2023 and March 2023! Email me to be considered for these litters – shanspitz@gmail.com 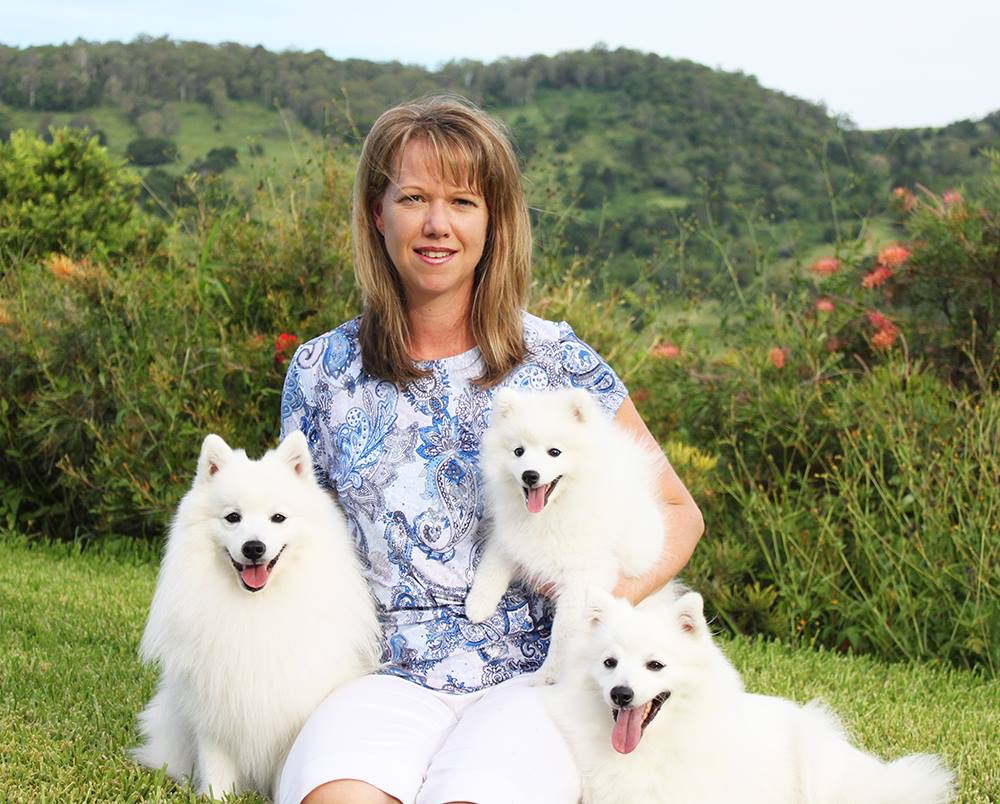 Hi, my name is Shannon, I live in the bay suburbs of Brisbane, Queensland, Australia, with my husband, 2 son’s and our beautiful Japanese Spitz.  When I first saw the Japanese Spitz at a Brisbane Pet and Animal Expo in 1998, I fell in love at first sight, how could you not!

My husband and I were looking for our first dog. His only two requirements were that it did not “smell” and that it did not slobber”. We had in mind a smallish dog but not too small and one that would not fret if it was left alone during the day while we were at work. Now in saying that the Japanese Spitz is a dog that needs to be with you but they are also very independent and enjoy their own space and time. So the Japanese Spitz was a perfect match for us. I too, as most do immediately thought that it would be a high maintenance dog with such a lovely white and long coat. But much to my amazement they are actually a low maintenance dog which “Dr Harry” has said on his show when they road tested the Japanese Spitz on one of his programs.

With some research into the different breeders I contacted one and put my name down on her puppy list, we waited over 12 months for my baby girl. At first I just wanted a pet as I was not interested in showing or breeding at the time. My husband took me to a dog show at Durack on the Dogs Qld Show Grounds where his uncle was up from NSW showing his Doberman’s. We spent the day watching all the different breeds and all the goings on at the show. I came away from there wanting to show myself. As I had horses and competed with them, the show circuit was like second nature to me. So I called the breeder and said that I would ideally love to show and if I could change my order to a show female. Chanel arrived to our home, and changed our lives forever. She was such a character and entered our hearts and gave us lots of love and joy and was the fundamental start for me as a breeder. In the Show ring Chanel achieved her Australian Championship and some ribbons along the way. Sadly Chanel passed away in April 2010 just shy of 11 years old. Rest in peace my very much loved and missed beautiful girl. 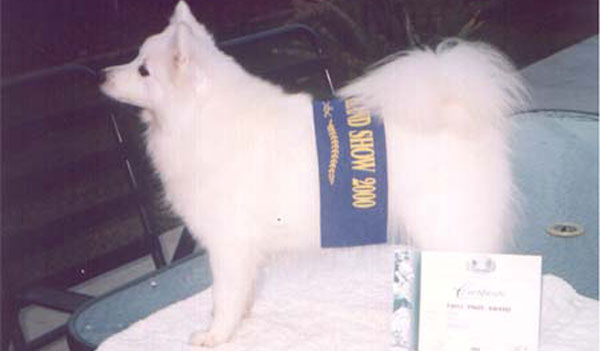 After having Chanel for over a year I decided that I would like to get a male to show and one that would be compatible for Chanel for breeding. So I contacted the breeder of Chanel and she put me in contact with a Breeder in VIC.

Jester was the biggest sook you will ever meet, he was such a great ambassador for the breed as he was always willing to come to the Brisbane Pet and Animal Expo’s with me each year for the 5 years that I exhibited the Japanese Spitz Breed to the public and he would willing sit up on the table for the 3 days letting everybody pat him, cuddle him and take pictures with him.  In the show ring he achieved his Australian Championship Title and some nice ribbons along the way. Unfortunately Jester passed away in May 2013 at 11.5 years.  He was such a lovely old soul and I miss him dearly. 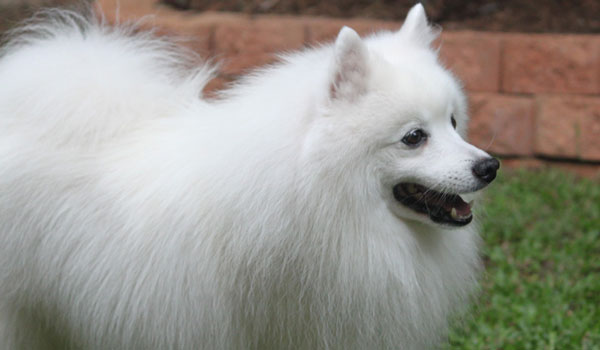 A few years later and three litters later, I decided to keep a puppy for myself from my third litter. Paris was the newest addition to the family and fitted in like she had always been here.  Paris was the start of my winning showing career.  Taking out many of the Top Group and In Show awards, consistently winning the Best of Breed at shows and she is still to this day the only Japanese Spitz female in Queensland to obtain the prestigious title of Grand Champion.  Paris passed away in Feb 2014 at 9.5 years. I miss her so much, she was such a beautiful girl and very special to me. 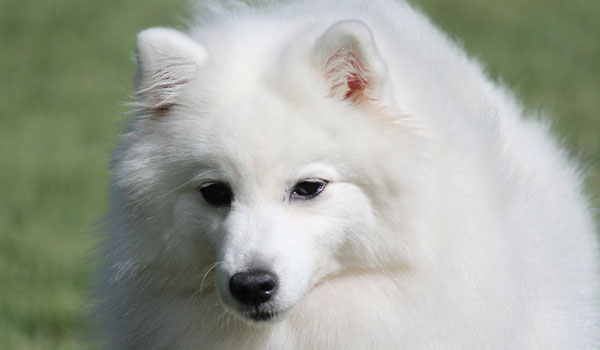 I then decided I would love a son from Paris, so I chose a lovely stud dog “Bill” for her and we produced Da Vinci.  He was a full on puppy that was either flat out or stopped, there was no in between for him. He took the show ring by storm and was my “One in a Million Dog” He won Best in Show at the inaugural Japanese Spitz Club of NSW Breed Specialty Show from 61 breed entries.  He won Multiple Best in Shows at All Breeds Shows and Runner up Best in Show at All Breeds Shows.  He would take out the Best in Group or Reserve in Group at most shows he attended and many many in Show awards along the way and he was only 3 years old and just getting started.  He achieved the highest title you can of Supreme Champion with ease. I was also training him in Agility and we had attended a few trials and we were really enjoying ourselves.  Then very suddenly without much warning he passed away from a rare lung disease in Feb 2013 at just over 3 years.  Showing no signs of being sick until 48hrs before his passing.  He won Best in Show one Saturday and was gone the next Saturday.   I miss him so much it hurts, not a moment in my life goes by without me thinking of him, he was indeed very very special to me and still is. I love you my sweet boy and miss you with all my heart. 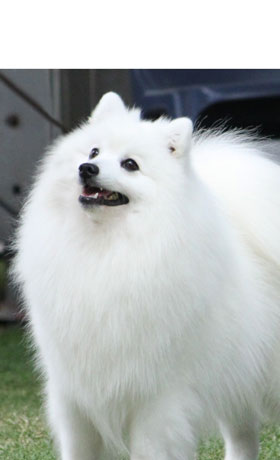 With the passing of Da Vinci a piece of me died too, my best friend my soul mate had gone.  I did not have a dog to show nor was I sure I wanted to show any more.  Paris was no longer able to breed for me due to her age and being desexed.  So I reached out to my dear friend Elise from Yukihanna Japanese Spitz.  She bought her first show dog from my 4th litter.  She had since had a few litters of her own and kept a girl called Romi that was from her foundation bitch Meko from my 4th litter put to Paris’s father Orlando.  So the lines were very similar to my Da Vinci.  So I leased Romi and put her back to Da Vinci’s dad Bill and produced “My New Beginnings Litter”, a litter of three in July 2013.  I kept a boy “Azlan” and a girl “Portia” from this litter and they are our much loved furkids.  They have both done extremely well in the show ring.  Azlan won Runner up Best in Show at the NSW Japanese Spitz Specialty in 2016 from 45 breed entries and in 2022 from the Veteran Class 7+ years won Runner up Best in Show at the Inaugural Queensland Japanese Spitz Speciality from 32 entries.  Not bad for an old fella. He has also achieved the highest title you can of Supreme Champion. Portia has was is also very successful in the show ring with many awards and has dominated over all the other bitches being shown against her. She is now being show in the Neuter class and is dominating the neuter of breed each time she steps in the ring and has taken out many Best Neuter in Show and Runner up Neuter in Show awards making me very proud as she is a lovely example of the breed.

After 2 years of trying to start a family ourselves David and I decided IVF was our next option,  18mths later I was successful in falling pregnant and we have welcomed into our family our first born son Alexander born in November 2014.  Alexander has grown up with Azlan and Portia, and they are all besotted with each other and inseparable. We now have little Thomas born in October 2016 to complete our family. Azlan and Portia are always by the boys sides and I have no doubt they will all grow up together to be best friends. 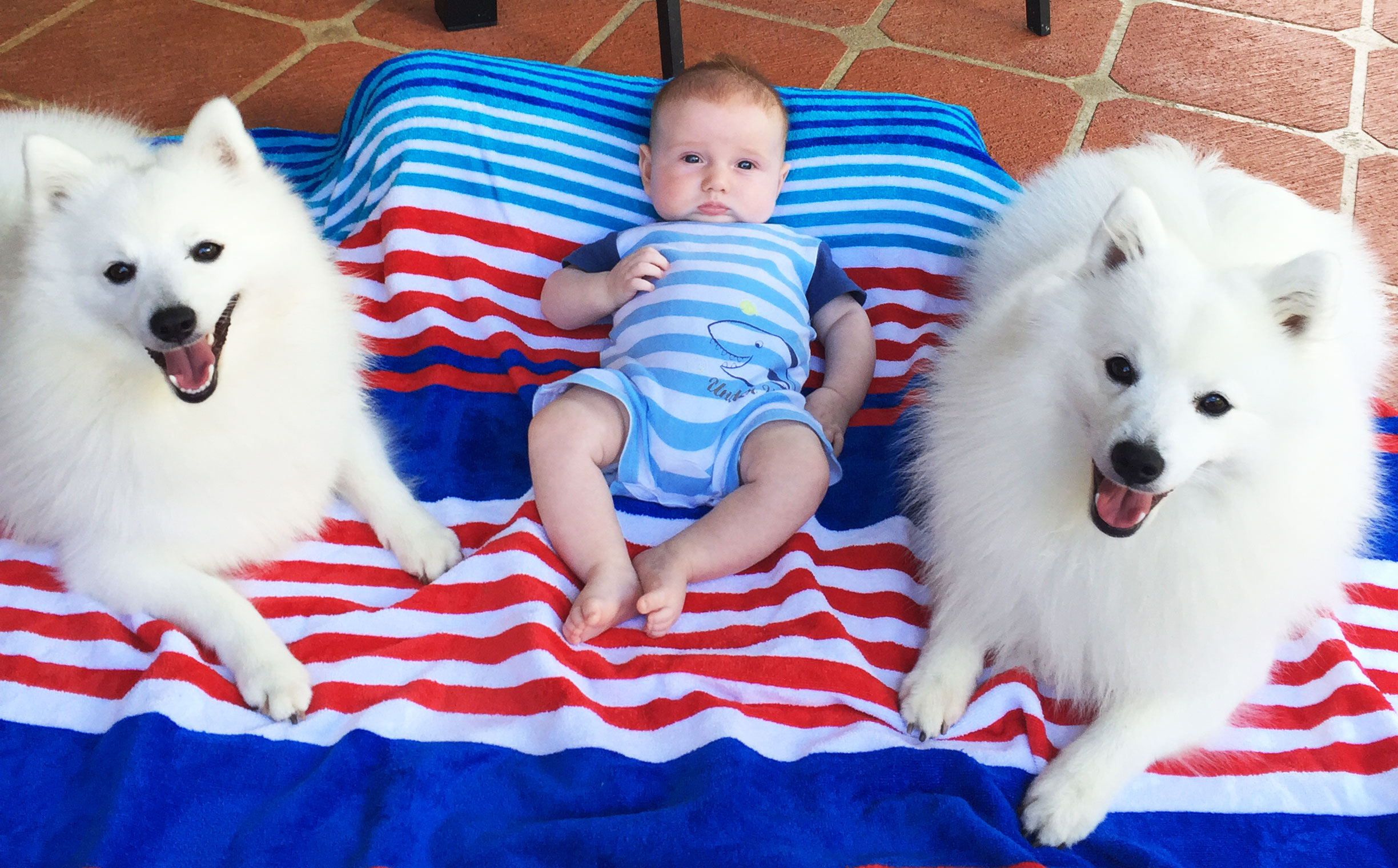 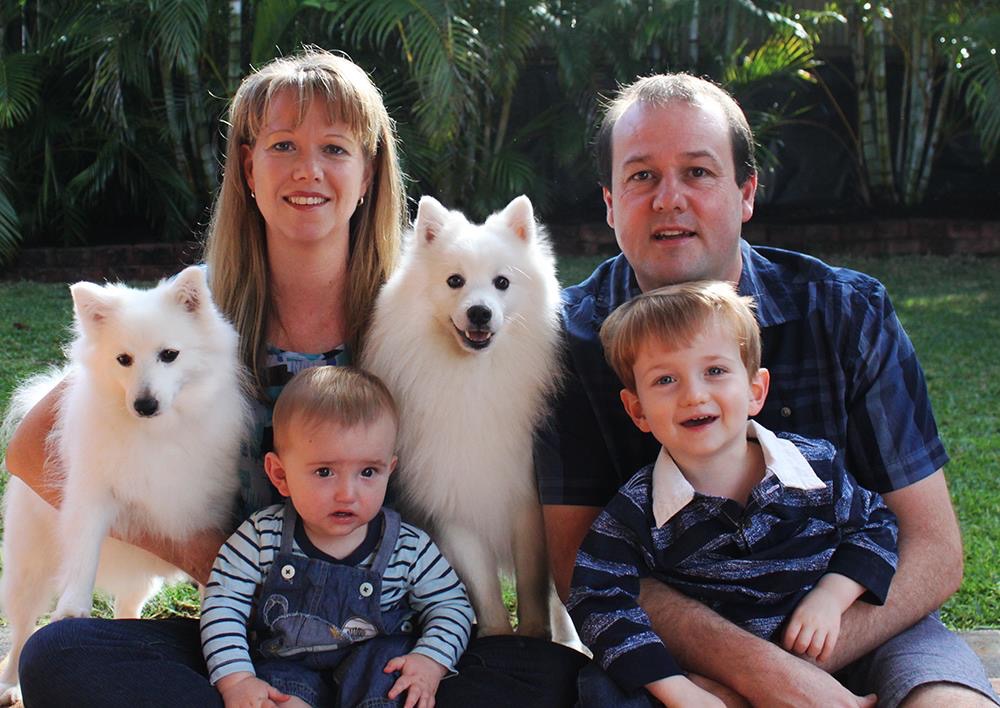 So for someone who just wanted a pet dog, I am now an avid exhibitor and have had the breed for over 20+ years and have the Top Winning Japanese Spitz in the country. I am able to continually breed quality dogs that represent the breed with the highest standard. Conformation, type and temperament are paramount to me. I had the Japanese Spitz stand at the Brisbane Pet and Animal Expo for the 5 years the event took place, where I would take in my dogs for the 3 days and exhibit and educate the public on this rare and beautiful breed.  I have presented the breed and the breed standard to trainee judges to assist them in learning about the Japanese Spitz which they are required to do to become championship show judges, and I am on the committee of The Queensland Kennel Council of Qld Club and I am now currently doing my judges license and am licensed to judge Non Sporting and Toys.

So whether you are looking for an additional family member or a champion show dog remember me, as a caring, loving and reputable exhibitor and breeder and one that cares about the health and the homes her puppies go to.  Shanspitz Japanese Spitz is located in Brisbane, Queensland, Australia. 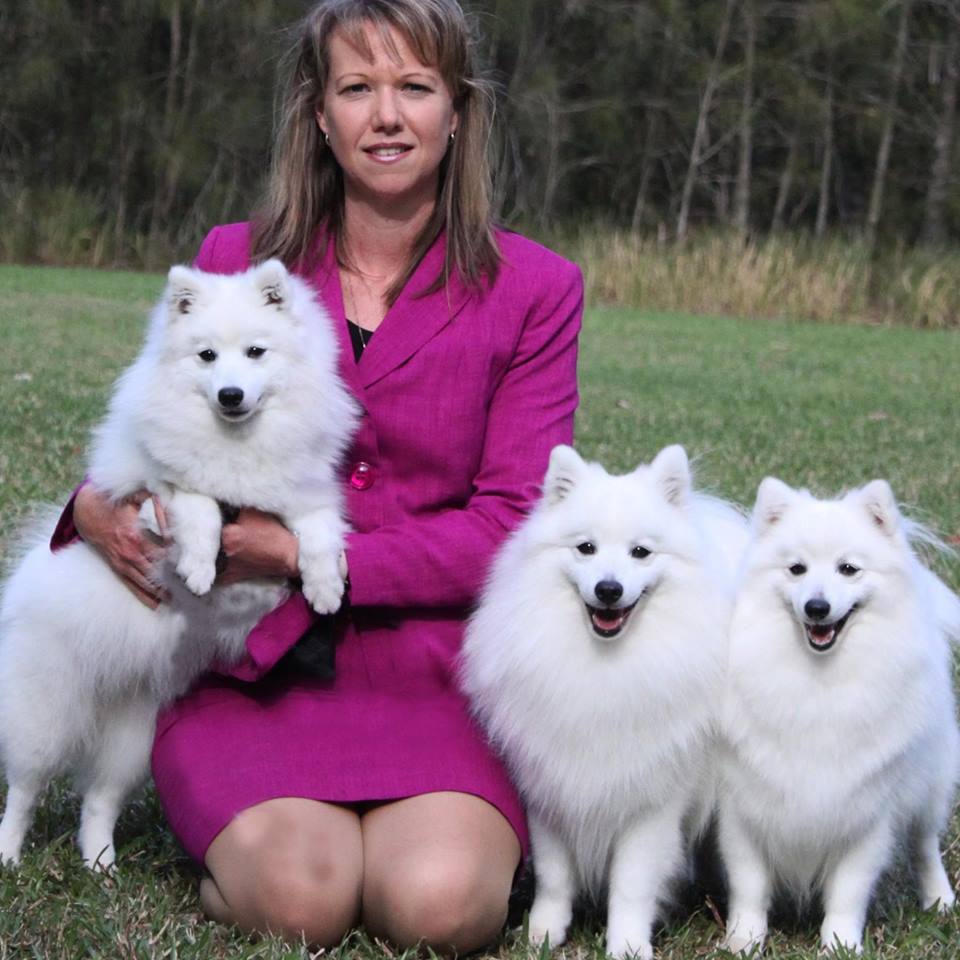